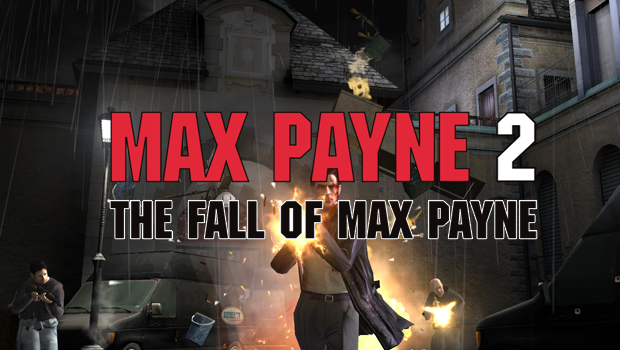 Max Payne 2: The Fall of Max Payne is a violent, film-noir love story. Dark, tragic and intense, the in-depth story is a thrill-ride of shocking twists and revelations. Love hurts.

Max Payne 2 is set in New York City once again. The dirty gritty streets of Hoboken are also a part of the game. Throughout the story, you’ll go through different locations such as warehouses, flats, buildings, rooftops and streets.

Two years after the events of the first game, Max Payne is an NYPD detective. While investigating a series of murders by a group of hitmen known as The Cleaners, Max encounters Mona Sax, who was assumed dead at the end of the previous game. Because of Mona’s crimes, she is taken in to the police station, despite Max’s protests. While at the station, Max overhears his new partner, Valerie Winterson, talking on the phone about Mona. Suddenly, the station is attacked by hitmen looking for Mona.

Max breaks Mona out of her cell, and after fighting off the hitmen, Max and Mona begin hunting down the people responsible for the attack. Their search leads them to a construction site, where he and Mona defend themselves against the same hitmen. After their foes leave, Detective Winterson arrives and holds Mona at gunpoint. Mona claims that Winterson is there to kill her while Winterson claims that she is simply trying to arrest a fleeing fugitive. After several moments of consideration, Max shoots Winterson, allowing Mona to escape. Before she dies, Winterson shoots Max, leading to his hospitilization.

After Max leaves the hospital, he finds Mona, and together, they begin to look for answers. When Max is kidnapped by Vladimir Lem, head of the Russian mob, he learns that The Cleaners work for Lem, who used them to eliminate competition to his businesses. Max then learns that Lem is part of the secretive Inner Circle; Senator Alfred Woden, the leader of the Inner Circle, had ensured that the charges against Max were dropped at the end of the last game. Lem plans to kill Woden and gain control of the Inner Circle. Max also learns that Mona is a hired gun for Woden, with orders to kill Lem and Max. Finally, Max discovers that Detective Winterson was Lem’s mistress; to avenge her death, Lem shoots Max and leaves him for dead in a burning building. Mona rescues Max, and together, they go to Woden’s mansion to save him from Lem.

At the mansion, Mona knocks Max to the ground in an attempt to follow her orders to kill him, but discovers that her feelings for him keep her from doing so. Lem shoots Mona after realizing that she will not kill Max. Woden then appears in a wheelchair, and lunges at Lem; Woden is killed during the ensuing struggle. Max and Lem then fight while the mansion burns around them. Eventually, Lem is killed as the floor underneath him collapses. Max returns to Mona’s side as the police arrive, and she dies in his arms. If the game is completed at its highest difficulty level, Mona survives.

Some characters from the original Max Payne 1 are also in Max Payne 2. You can find the list of characters below.

A few weapons from Max Payne 1 are also in Max Payne 2. The following are weapons which Max Payne can use:

Part I: The Darkness Inside

Part III: Waking Up from the American Dream

Max Payne 2 is a third-person shooter video game developed Remedy Entertainment and published by Gathering of Developers on October 2003 for Microsoft Windows. Ports created later in the year for the PlayStation 2 and Xbox were published by Rockstar Games. The game is also available on XBL and Steam.