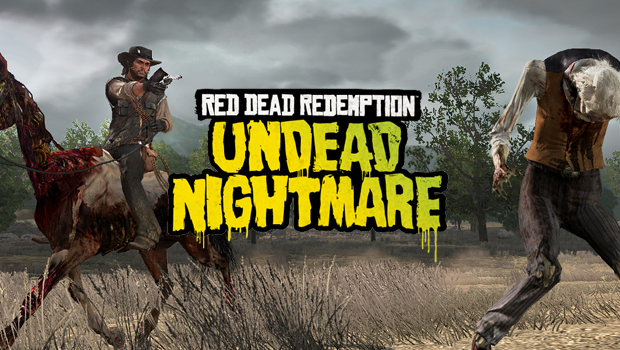 Across the vast Western frontier, a plague is spreading…

When former outlaw John Marston wakes up at his farmhouse, he finds a world gone insane: overnight, deranged hordes have overrun the towns and outposts of the American frontier. In a desperate attempt to save his family, Marston must traverse a world torn apart by chaos and disorder, using every skill he has to survive long enough to find a cure.

The Red Dead Redemption: Undead Nightmare collection is now available on disc worldwide. Take on the Dying and Undead West in multiplayer with exciting Co-Op missions and Competitive Modes. Attack and defend in Stronghold mode, or take over territory in Land Grab. Play online as iconic characters from Red Dead Revolver or as the legends from Red Dead Redemption. School your friends in Poker, Liar’s Dice and Horse Racing and annihilate your enemies with the deadly Tomahawk and Explosive Rifle.

Red Dead Redemption spans two fictitious United States counties and a fictitious Mexican state: New Austin, West Elizabeth, and Nuevo Paraiso. New Austin and West Elizabeth are adjacent to each other and share a southern border with Mexico. Nuevo Paraiso is a Mexican state, separated from U.S. territory by the San Luis river. The game takes place primarily in the year 1911, featuring the end of the American Frontier and the cowboy and outlaw archetypes that shaped it. The landscape of the Wild West is beginning to fade and modern technologies like automobiles, machine guns, and oil drilling projects are beginning to appear.

John is in his house at the Marston Ranch with Abigail and Jack. Uncle is then seen loitering outside the house; unfortunately, he is undead. Later that night, while John and Abigail are asleep, Uncle invades their room and tries to attack them. John fights back, seemingly knocking him out. John heads for his gun in their shed but on his way back, Abigail runs out of the house screaming, pursued by Uncle, who bites her in the neck. John shoots Uncle in the head and tends to Abigail. Jack comes outside and tries to help his mother. However, Abigail turns into a zombie and bites Jack, infecting him. Meanwhile, John runs for his lasso and hogties both of them. After giving them both a plate of food, he leaves them in the house and sets out to find a cure. John then goes to Blackwater, which he finds in chaos and ruin. There he finds Professor MacDougal. John talks to MacDougal about a cure, but MacDougal is suddenly attacked and by an infected Nastas, and John is forced to clear Blackwater of the undead, as well as look for more survivors. John finds a group of survivors who all give him multiple theories as to what caused the plague, most significantly, a snake oil merchant, and a “freak with a glass eye.”

Following the “freak with a glass eye” lead, John finds Seth in the Old Bacchus Place, playing cards with an undead Moses. John asks Seth if there’s a cure to the plague, and Seth tells him to clear the graveyards around New Austin. After John clears out the graveyards and goes back to Seth, Seth tells him that the cause of all this has something to do with the Aztecs, and also tells him to head down for Mexico if he wants to cure the plague.

Following the snake oil merchant lead, John finds Nigel West Dickens in Fort Mercer, trying to sell his elixir as a cure and repellant to the plague. John forces Nigel to stop selling it, and Nigel complies and hands out free samples to people. The elixir is actually more of a bait, and a man who drinks some of it is killed by undead soon after. Nigel is disappointed and asks John to find him some flowers in hopes of creating a better cure. After John finds the flowers, Nigel makes a phosphorus bullet coating with them, and then asks John to find him some old parts he needs. After John finds the parts, Nigel uses it create a blunderbuss, telling John that it is the ideal weapon for undead killing. He also tells John that he is trying to get to Mexico and should be in Solomon’s Folly in a few days. At Solomon’s Folly, John finds out that all paths to Mexico are blocked. Nigel tells John that if he gets a U.S. Army uniform from some deserters, he can sneak on a train manned by the Army that is headed to Mexico. When John heads to the deserters, he finds them being attacked by undead. The player is faced with two choices: either help the soldiers and earn the uniform, or steal it and suffer the consequences. After John has the uniform, he can head to the train, where he finds the Army being hassled by the undead. John helps them clear out the air, securing a path to Mexico. At the border, a roadblock is in place. The captain of the group tells them all to get off and clear it. However, they are attacked by undead. Fearing their demise, the soldiers retreat and abandon John. John kills all of the undead, mans the rain, and heads straight through the roadblock, smashing it, and into Mexico.

In Mexico, John finds that it is actually in a worse shape than America, and he heads to Las Hermanas, where he meets Mother Superior, a nun. She tells John that other nuns are not as resourceful as her, and that he needs to head inside Las Hermanas and save the town. After doing so, Mother Superior thanks John and he asks her why the plague is happening. She tells John that she needs an undead to find out. After John brings her one, Mother Superior tells John that she suspects evil, and she pours holy water on the undead, who is briefly bathed in blue flame, but is not killed. She asks John if he can clear out the Sepulcro graveyard for her, and she gives him holy water. After he returns, Mother Superior tells him that a woman told her that the cause of all this is because of something Abraham Reyes has done. John is then tasked with heading to Escalera and finding out what’s really causing all this.

In Escalera, John finds a woman, who tells him that Reyes is there, in Escalera. John finds an undead Reyes trying to eat a woman. After John kills Reyes, and the woman tells John that the cause of the plague is Reyes’ lust for invulnerability, causing him to steal an ancient Aztec mask. They find and take the mask to the crypt where Reyes found it, and after John places the mask back in the altar, the women reveals herself to be Ayauhtéotl, an Aztec goddess. Returning the mask stops the plague, returning the undead to their previous conditions.

Undead Nightmare has a total of 15 missions. These are listed below in alphabetical order:

A Cure for Most of What Ails You

Birth of the Conversation Movement

Filth and Other Entertainment

Get Back in That Hole, Partner

Love in the Time of the Plague

On a Pale Horse 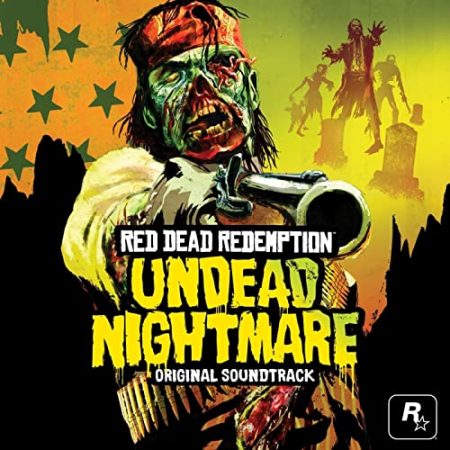