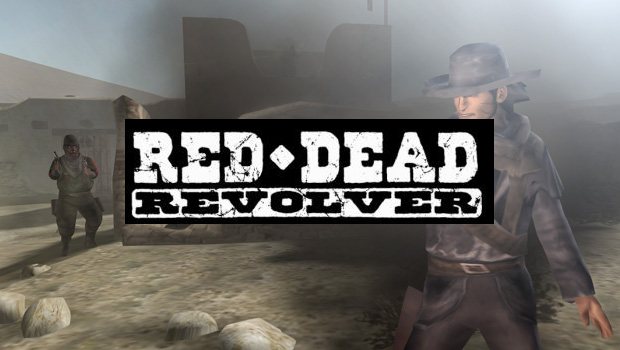 A blazing arcade-style third person game fueled by precision gunplay, Red Dead Revolver is a classic tale of vengeance on the untamed frontier.

The addictively fun, innovative combat scheme rewards accurate and ruthless elimination of backwater lowlifes. Ride down outlaws on horseback, fight bloody duels aboard trains, command stagecoaches and more in your quest for justice.

Punctuated with dark humour and filled with the elements that make the Wild West so compelling, Red Dead Revolver’s story is told through full motion cutscenes and breath-taking in-game visuals.

This game takes place in the 1880s Wild West as Nate Harlow and his partner Griff have found gold in an area called Bear Mountain. To celebrate the find, they commission the creation of two revolvers with a distinct iron cast scorpion on each; Nate takes one and Griff takes the other.

Griff is later captured by the Mexican army and sentenced to be executed. However, he offers General Diego half the gold in Bear Mountain if he were to spare his life. Diego complies but later sends his right-hand man, Colonel Daren, to kill Nate. Daren arrives with his men to the Harlow farm and shoots Nate and his wife, Falling Star. However, Nate’s son Red retrieves his father’s gun and shoots off Daren’s left arm before he escapes.

Years after his parents’ passing, Red becomes a bounty hunter. He begins by battling a gang led by an outlaw of the name “Bloody Tom”. Hoping to claim the bounty on the gang, he takes them prisoner in the town of Widows Patch where he is attacked by a rival gang and its leader “Ugly Chris”. Red and Sheriff O’Grady beat the gang and survive the attack but the sheriff is badly wounded and must travel into town to see a practitioner.

After Red drops O’Grady off, Brimstone’s Sheriff Bartlett asks him to help take care of some thugs. This includes battling an evil coupe led by Jack Swift along with other bounties. After all the bounties are complete, he asks for the bounty on the coupes’ head. He is told by Griffon, now the city’s governor, that the gold wagon carrying the head has not yet arrived and later learns that one of the townsfolk, Annie Stoakes, is in danger of losing her farm and that Governor Griffon owns part of Bear Mountain. Recalling that his family was killed over that very mine, he goes to discuss the issue with Annie. After the talk, he is led back to Sheriff Bartlett, from whom he discovers that General Diego and Colonel Daren are still alive and court bound. Finally, with the aid of his Native American cousin Shadow Wolf, Red attacks Diego’s fort and kills Daren. Afterwards, Red strikes out on his own and disables the train carrying Diego’s gold. In the ensuing firefight, Diego is critically wounded. He offers Red everything. However, Red declines and kills General Diego.

Later, during the quick-draw competition, which Annie Stoakes and Jack Swift both attend, Red learns that it was Governor Griffon who sold out his parents to General Diego. Governor Griffon orders Red to be killed by contestant Mr. Kelley, but Red defeats and kills him instead and pursues Griffon back to his mansion. There, Red shoots Griffon in quick-draw fashion and for killing him the Sheriff offers to pay Red the gold he is owed. Red, however, refuses and takes Griffon’s revolver instead, later claiming “it was never about the money.”

Red Dead Revolver doesn’t have a lot of central or major characters in the game unlike others like Max Payne or GTA, however below are the characters you’ll meet:

Below is a list of available weapons in Red Dead Revolver. They’re sorted into categories.

Red Dead Revolver is a western third-person shooter video game developed by Rockstar San Diego, published by Rockstar Games and distributed by Take-Two Interactive for the PlayStation 2 and Xbox. It is the first game in the Red Dead series. The game was originally developed by Capcom, borrowing elements from their 1985 title Gun.Smoke, the project was dropped in 2002. Rockstar Games then purchased the game and expanded on it.