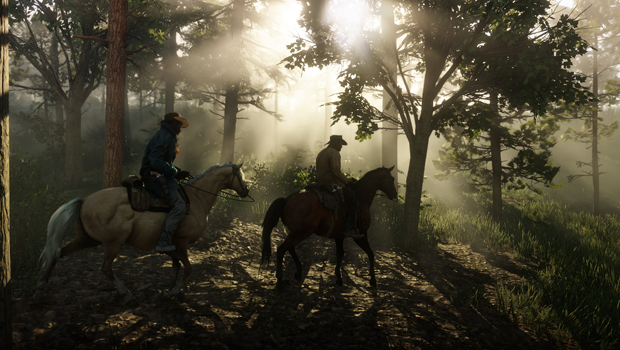 Red Dead is a wild-west themed action-adventure game consisting of three entries. Red Dead Revolver is the first entry in the series and was released for the PlayStation 2 and Xbox in 2004. The game is set during 1880 and follows the story of bounty hunter Red Harlow as he uncovers the plot that killed his parents and seeks to revenge on those responsible. The game world is set apart from the Redemption entries that follow, however there are a version events in the plot of Red Dead Revolver which could have still taken place due to the nature of legends told in the Red Dead game’s world

Red Dead Redemption is the second installment of the Red Dead series. The game released in 2010 for both PlayStation 3 and Xbox 360 and takes place after Red Dead Revolver in the year 1911, during the rapid decline of the American Old West and Mexican Revolution. The storyline of Red Dead Redemption follows John Marston, a former outlaw who’s family is kidnapped by the Bureau of Investigation. In exchange for his family’s return, John is set out to hun down serving members of his former gang, in the process achieving closure and redemption for his past actions

Red Dead Redemption 2 is the third entry of the series and is a prequel to Red Dead Redemption. The game released in October 2018 for PlayStation 4 and Xbox One and then for PC in November 2019. The story follows the protagonist, Arthur Morgan, a member of the Van Der Linde Gang during the year 1899. This same gang is the one John Marston was a part of prior to Red Dead Redemption. The game features several returning characters as well as new ones, however the story focuses a lot on Arthur’s morality and relationship with these characters involved.