By Lewis In Grand Theft Auto: The Trilogy On 22 October 2021 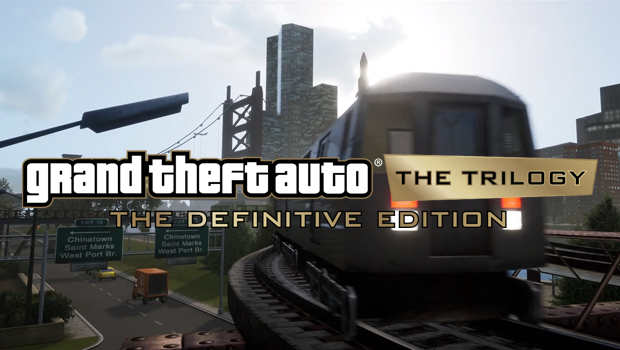 After weeks of numerous rumours, leaks and speculation… we finally have everything we have been waiting for! Today marks the 20th Anniversary of Grand Theft Auto III, a game which revolutionised gaming and changed the way games are developed today. In honour of this anniversary, Rockstar Games have released all the details about GTA: The Trilogy – The Definitive Edition which we have been craving including the official release date, information on the upgrades, screenshots and the anticipated Official Trailer! Read below to find out more!

GTA: The Trilogy – The Definitive Edition will be available digitally on Xbox One, Xbox Series X|S, PlayStation 4, PlayStation 5, Nintendo Switch and PC via the Rockstar Games Launcher on NOVEMBER 11TH.

GTA: The Trilogy – The Definitive Edition will then be available via physical copy for Xbox One, Xbox Series X|S, Nintendo Switch and PlayStation 4 on DECEMBER 7TH. There is no mention of a physical version for PlayStation 5 as of yet, whether this is just a typo mistake on Rockstar’s behalf is unknown.

You can Pre-Order GTA: The Trilogy – The Definitive Edition by clicking the relevant stores below:

The worlds of Liberty City, Vice City and San Andreas are brought back to life with GTA: The Trilogy – The Definitive Edition. The game debuts new GTAV-inspired modern controls, plus across-the-board visual enhancements such as resolution upgrades and improved visual fidelity across each world, including much more which faithfully tunes and improves all three games whilst also maintaining their distinct original aesthetic.

There are also a number of modern control upgrades, including improvements to targeting and lock-on aiming, updated Weapon and Radio Station Wheels, updated Mini-Maps with enhanced navigation allowing players to set waypoints to destinations, updated Achievements, Trophies and more. The Nintendo Switch version also features Switch-specific controls including Gyro aiming, as well as touch screen camera zooming, pans and menu selections, whilst the PC version will include support for NVIDIA DLSS and additional new Accomplishments via the Rockstar Games Social Club.

Additional enhancements across all three titles include a completely rebuilt lighting system; improved shadows, weather, and reflections; upgraded character and vehicle models; along with new higher resolution textures across buildings, weapons, roads, interiors, and more. Grand Theft Auto: The Trilogy – The Definitive Edition also features a range of environmental upgrades including all new foliage, smoother surfaces, and increased draw distances to provide a new level of depth and clarity throughout the world.

Originally developed by Rockstar Games, Grand Theft Auto: The Trilogy – The Definitive Edition has been adapted to modern platforms by Grove Street Games using Unreal Engine to make these classics more vibrant and more immersive than ever, celebrating the legacy of the series that redefined interactive entertainment and helped propel video games to the center of culture.

Along with the announcement, a number of screenshots have been revealed by the official GTA: The Trilogy – The Definitive Edition website. Check out the gallery below!

They always say, save the best until last… of course we couldn’t forget to share this absolutely awesome trailer which shows off the comparison between the original games and The Definitive Edition! Check it out!